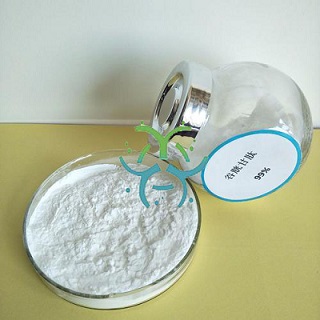 Since the year of 2007,we are one of the leading glutathione supplier & manufacturer in china

Glutathione (GSH) is named Reduced glutathione or L-GlutathioneReduced ,an important antioxidant in plants, animals, fungi, and some bacteria and archaea,a white crystalline powder. It is atripeptide with a gamma peptide linkage between the carboxyl group of the glutamate side chain and the amine group of cysteine, and the carboxyl group of cysteine is attached by normal peptide linkage to a glycine.Thiol groups are reducing agents, existing at a concentration around 5 mM in animal cells. Glutathione reduces disulfide bonds formed within cytoplasmicproteins to cysteines by serving as an electron donor. In the process, glutathione is converted to its oxidized form, glutathione disulfide (GSSG), also called L-glutathione.

Drug applications:
1.Protect the liver and treat liver-related diseases.
2.Treat tumors and reduce side effects of chemotherapy and radiotherapy.
3.Glutathione as an antidote, can combine with toxic compounds, heavy metal ions or carcinogenic substances to promote their excretion. It can be used for the detoxification treatment of acrylonitrile, fluoride, carbon monoxide, heavy metals and other organic solvents.
4.Treat ophthalmic diseases, especially cataracts.
5.Glutathione can regulate the imbalance of acetylcholine and cholinesterase. It plays an anti-allergic role.
6.Recent studies indicated that glutathione may also have the effect of inhibiting AIDS virus.
Food and applications:
1.Glutathione equivalent to vitamin C, can be added to yogurt and baby food and play a stabilizing role;
2.Since glutathione can prevent pigmentation, it can be added to canned fruits to prevent Browning;
3.Because of the reducibility of Glutathione, it can be added to the flour products to play a reduction role and strengthen the amino acid;
4.Adding Glutathione to bread can shorten the mixing time in the manufacturing process
5.Glutathione has a strong meat flavor when mixed with L-glutamate, nucleic acid flavoring substances or their mixture.
Glutathione can inhibit nucleic acid and enhance flavor in fish cake.
6.Glutathione can enhance flavor in meat, cheese and other food products.
7.Different types of functional food and health food are prepared with glutathione as the functional active factor.
Cosmetics and applications:
1.Glutathione can purify cytotoxic substances. The use in skin care products can treat and relieve excessive heavy metals in the skin and toxins in dust.
2.Glutathione is an anti-aging antioxidant. It can remove free radicals in the body and maintain biological activity of proteins and enzymes. It is the main free radical scavenger in the body, so that the free radical scavenging reaction can continue.
3.Glutathione has an excellent whitening effect by transdermal absorption. It inhibits the production of free radicals and
peroxides from melanin to reduce the biochemical activities of melanocytes and neutralize the toxic substances from pigment cell.
It eventually protects pigment cells from necrosis and metamorphism.